That Truth is omnipresent has been proved to me

That Truth is omnipresent has been proved to me. Once in need of help I tried to get a friend on the telephone but did not succeed. In telling her later she answered me thus: "Truth can always be found." Those few words became such a great help to me. One Saturday afternoon my family and I went to a farm on a visit over Sunday, expecting to leave on the early train Monday morning, but that morning my three small children were very sick. It looked like a case of poisoning, and I was almost overcome with fear. Looking over that small telephone directory on the farm I did not know where to turn. If I only had brought a Christian Science Journal with me I could have found the address of some practitioner. Then I remembered my dear friend's words, "Truth can always be found." I called the farmer's daughter who was working in a near-by town and told her to ask the lady she worked for if she knew of a Christian Scientist. Instead of calling me that lady called a practitioner and asked her to call the farm, and it did not seem more than one minute until the telephone rang and the practitioner was speaking to me. All fear left, the children got well that day, and we left the farm on the early train Tuesday morning. Oh, how thankful I am for the truth.—(Mrs.) Helga Sandels, Chicago, Ill.

Send a comment to the editors
NEXT IN THIS ISSUE
Testimony of Healing
It is five years since I began the study of Christian Science... 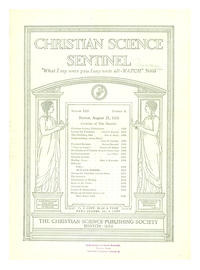