"Thou art the man"

A most forceful story is to be found in the twelfth chapter of II Samuel, where the prophet Nathan narrates to David the parable of the poor man whose one little ewe lamb had been taken from him by a certain rich and powerful man to provide food for a traveler. It is not difficult to understand that the king was filled with indignation as he listened to this story, and he no doubt felt that here was an occasion to administer swift, kingly judgment, very likely waiting with impatience to learn the name of the offender. The king's reign had been very prosperous, and the exalted position which he occupied had enabled him to gratify almost every desire. He had traveled far in the pursuit of personal pleasure and aims since he, as the young shepherd, slew the lion with his bare hands, and, with only a sling as a weapon, had slain the giant Goliath; and perhaps without realizing the heinousness of his misdeed, had violated in the most flagrant manner the sacred family circle. This finally brought down upon him the condemnation of the prophet Nathan. With crushing directness, he said to the king, "Thou art the man."

The lesson contained in this story is worthy of deep study, and an application of the moral which it contains can be made to every one, it matters not what position he may occupy. The real selfhood of David always had been pure and perfect, as the indestructible image and idea of God, and David was no more a king in this respect than every other man who ever lived; but the fleshly mind, the only sinner, had brought upon David the scathing reprimand from Nathan. The counterfeit man, whom we seem to see, is not God's man, but a supposititious, carnal belief, misnamed man, which sins, lies, and practices all manner of wickedness simply because there is no truth in it. It is this counterfeit which deserves condemnation. In the Scriptures man constantly is admonished to put away evil and unclean thoughts, and rigorously to sacrifice the lusts of the flesh. This is not a task for a day, a year, nor for a lifetime, but one that will continue until all trace of mortal thought is destroyed. Until this is done, the charge of Nathan will apply just as surely and forcibly as it did in the days of David. When this fact becomes more fully and clearly understood there will be less lingering among the fleshpots of Egypt, and less delay in setting out on that journey toward the realization of the kingdom of heaven, which sooner or later must be undertaken by every one; but just so long as mankind bows to a belief in the flesh, whether it be of sickness or of lack, of ambition or of anger and vexation, just so long will mankind need the admonition, "Thou art the man." 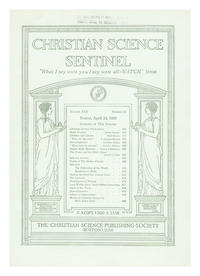