So long as the miracle was defined and dismissed as a...

So long as the miracle was defined and dismissed as a supernatural occurrence, it made practically very little difference to religion. Orthodoxy accepted it as an act of faith, and explained, through the mouth of a famous pope, that only the acceptance of the supernatural constituted faith. Skepticism, if bitter, dismissed it with ridicule; if kindly, sought to explain it away, and so redeem the sanity and veracity of the gospel historians. Then came natural science, holding the scales level between orthodoxy and skepticism; pointing out to both that the impossible never happens; and adding, for the benefit of the latter, that the defense of the good faith of the evangelists must be based on something stronger than editorial glosses. So matters stood when Mrs. Eddy discovered Christian Science, and, in a moment, the miracle was rescued from the realm of speculation and ecclesiastical dogmatism, and given back to the divine Science of the gospel historians.

Now the word miracle never had any supernatural significance until such was forced upon it by dogmatic Christianity. It meant, in its original Latin form, simply something strange, and was the word used by the philosophers of pagan Rome to describe their experiments and demonstrations. The man who first borrowed it from pagan philosophy and applied it to the works of Christ Jesus was Jerome; but there is not only nothing to show that Jerome desired to distort the meaning of the word, there is everything to show that he did not. The evidence of this lies in the Vulgate, in which in translating from the original Greek words of the gospel, suvamis and onmeiov, he used their exact Latin equivalents, virtus meaning virtue in the sense of power, and signum meaning a sign. It is obvious, therefore, that the student of Christian exegetics will have to find his definition of a miracle as something supernatural, later than the fourth century.

Send a comment to the editors
NEXT IN THIS ISSUE
Article
In writing a recent letter a critic seemed to be laboring... 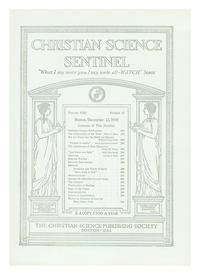