One beautiful spring morning a student of Christian Science was walking in one of the crowded streets of the city with a song of gratitude in his heart; for divine Love had met and conquered a seeming discord in the home of loved ones, after a night spent in earnest prayer. The complete demonstration of the power of Truth over error, and the unfoldment of spiritual light gleaned from the Lesson-Sermon, had so lifted thought above the trend of material activities that he was scarcely aware of the bustle of traffic about him. Suddenly his contemplation was interrupted by a loud noise and a shout of warning as a large object fell with a crash just in front of him, followed immediately by another just behind. He stepped aside as a third object fell where he had stood but an instant before. With no thought of fear and without looking back he resumed his walk, oblivious of anything unusual having occurred. Presently an eyewitness overtook him and exclaimed, "Well, you had a lucky escape," and a question brought forth the information that a large van loaded with heavy packing cases was drawing near the curb when a rope holding the load in place had parted, allowing the top boxes to fall in the order related. The informant, with a perplexed air then observed, "It is strange, but that middle box seemed to wait in the air for you get from under."

Strange? Perhaps so to the believer in chance and change, but to the seeker after Truth who had indeed found in Christian Science the divine law of protection and proved it in practical demonstration, it simply was the law of God's protecting power and ever presence, in which "we live, and move, and have our being." The words of the psalmist, "He that dwelleth in the secret place of the most High shall abide under the shadow of the Almighty," became a comforting message, which proved beyond all doubt that to be conscious of man as God's image, who could not for an instant be separated from his creator, and therefore dwells now and forever in that "secret place," was to experience a foretaste of heaven on earth. Heaven, Mrs. Eddy says in "Science and Health with Key to the Scriptures" (p. 587), is "harmony;" and again on page 291 she tells us, "Heaven is not a locality, but a divine state of Mind in which all the manifestations of Mind are harmonious and immortal." 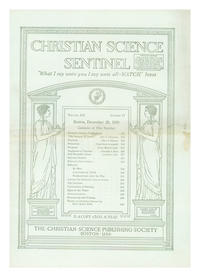