Christian Science makes a distinction between evil and the knowledge of evil which is of much importance in the solving of human problems. In the second chapter of Genesis it was not a tree of good and evil whose fruit was forbidden, but "the tree of the knowledge of good and evil." In commenting on the text just quoted Mrs. Eddy says, "It was not against evil, but against knowing evil, that God forewarned" (Miscellaneous Writings, p. 367).

The reason for making this distinction becomes clear in the light of the teaching of Christian Science, which shows that God, good, is All-in-all, having all power, presence, and knowledge; whence it necessarily follows that evil is without entity or existence, and is therefore nothing. The only way to destroy evil is on this basis,—the basis of its nothingness. To admit that evil is unreal or false is to admit all there is of it. Because evil seems to be real and present in human experience, it is a great help to know that it is false and unreal; but this alone does not destroy it. Because God, good, is All, however, and evil is nothing, it is the so-called knowledge of evil, or the belief in evil, which must be destroyed. This is not a distinction without a difference, for it is one of the essential differences between Christian Science and other systems of healing and reform. It might even be said that it marks the difference between the successful and the unsuccessful effort to demonstrate the truth. 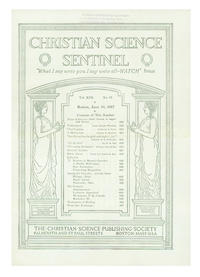