When the scribes and Pharisees came to Jesus and demanded an explanation as to why he permitted his disciples to transgress their racial traditions by eating without having first washed their hands, he showed them very plainly the great mistake which they were making and which is still being made, namely, that of cleansing merely the outside of the cup and platter. He did not overlook the fact that the outside should be kept clean; but he pointed out the importance of first cleansing the inside, lest we be "like unto whited sepulchers, which indeed appear beautiful outward, but are within full of dead men's bones, and of all uncleanness."

Jesus gave his hearers no chance to misconstrue his meaning when he said, "Out of the heart proceed evil thoughts, murders, adulteries, fornications, thefts, false witness, blasphemies: these are the things which defile a man." Every earnest student of Christian Science soon learns that he must honestly and willingly accept Jesus' rebuke, given so many years ago, and search faithfully his own consciousness. As he begins to exchange each erroneous concept for a thought of Truth, he begins to experience a great change wherever the need may be, whether morally, physically, or financially. 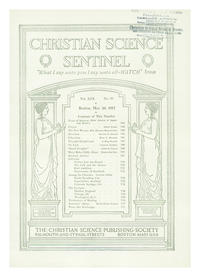