To any Christian the word overcoming has no uncertain meaning, but the student of Christian Science may possibly give it more serious consideration than do many other religionists. The great Master made a remarkable statement when he declared, "I have overcome the world." It is one that should be more metaphysically considered than it usually is, for it indicates to the would-be follower of Christ Jesus the precise mental course he himself must pursue. He too must overcome the world, and in order to do so he must understand just what the Master meant by such a statement. To the evidence of the material senses the world that Jesus lived in is as much in existence as it was when he left it. The same hills, mountains, lakes, and valleys are all there. He made no attempt with howitzer and dynamite to obliterate matter, he used no physical force or human will power, he left the world in physical outline the same as when he entered it,—but he overcame it.

In what sense, then, did Jesus overcome the world, and where did the overcoming take place? are questions which many might ask. Christian Science answers both these questions, leaving no doubt as to the exact meaning of his words. On another occasion Jesus said, "My kingdom is not of this world." In other words, he understood that the real or unseen world was the world of God's creating, and this spiritual understanding enabled him to overcome a limited, finite sense of the world. Just as one looking through a red or a green lens would see the same objects appearing either red or green, so by viewing the universe through a material or through a spiritual sense one would gain either a material or a spiritual concept of things. Christian Science interprets creation as seen through the lens of Spirit, and by holding to this interpretation and refusing longer to accept any erroneous material concept, it enables the honest seeker for truth to get the better of or to overcome that false sense which always judges according to appearances. 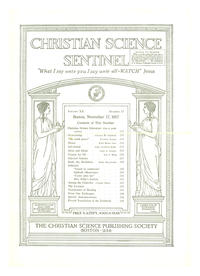