In going over the whole of the experience which follows, the writer's heart is full of gratitude to a loving Father, who guided, guarded, sustained, and delivered us during a recent disaster at sea. Every action of ours that day was a thought expressed, and that it was a reflection of God's thought the end will surely prove. The first saving thought was in changing the position of my steamer chair. It had been placed away forward, but my husband thought I would be warmer and more comfortable astern, so he moved me back. When the explosion came the place where I had just been sitting was entirely demolished.

It was a beautiful day, and my husband stood leaning on the rail near me, looking out over the water, when far away he saw the wake of a torpedo, and called out, "Torpedo coming!" Immediately afterward there was a crash, a whole sea swept over us, and the bow of the boat was cut off as with a knife, and sank from sight. I was very much surprised, after a few moments, to realize that we were still unhurt on the boat. We removed our coats, and within two feet of us hung two life preservers, which we helped each other to adjust. Then we stood there alone, as everybody had rushed astern. I asked where we should go, and never doubting that the ship would sink in a few minutes, my husband remembered what a friend of his, a passenger on a steamer which had been sunk, had said, that in case of shipwreck we should get up high; so we made our way forward, and up on the captain's bridge, where there were lifeboats. One was just being launched, and we got in along with about fifteen men, I being the only woman as the captain's bridge was very difficult to reach, the ladder leading to it having been shot away. 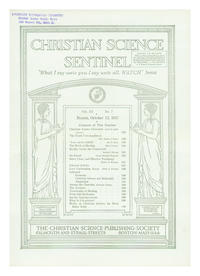