In seeking to know more clearly man's existence as an idea of God, practical help has been found through a personal experience, which the writer ventures to pass on in the hope that it may be useful to others.

At the solicitation of a literary friend I once started to write a book, and after completing eight chapters took it to a well known publisher for criticism. When told that if the rest of the book proved as good as these first chapters he would bring it out, I went home filled with ambition to complete it. Finding myself with more characters than could comfortably be handled, I deemed it advisable to drop one of them. Now these people were living and vital to me,—I felt a genuine affection for them; they were veritably "bone of my bones, and flesh of my flesh." When finally one was chosen for sacrifice, the one who had least to do with the purpose of the story, it seemed quite impossible to let her go. Several attempts were made, but they always brought such a sense of depression and grief that it was at length decided, after another futile effort of this kind, that the book must either go on with this character or not at all. 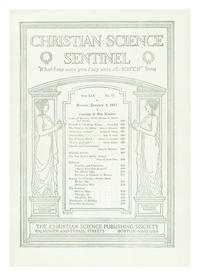