There are reasons why the courtesy of Christian Scientists should be spontaneous, unstudied, characteristic, since true courtesy is but the outward expression of that mental attitude which Christian Science inculcates, wherein brotherly love and thoughtful consideration for others are accentuated. "Be courteous" is the admonition Peter gave to the converted pagans and Christianized Jews in Asia Minor to whom his epistles were addressed. His words did not refer merely to the formal observance of the externals of manner and behavior. If he could but reach their hearts, their manners would need no looking after at his hands.

The word which has been translated "courteous" has a much higher meaning than is conveyed by our word courtesy as commonly used today. It is a composite of two Greek roots, philos, love, and phronos, mind, so that to be courteous is to have a loving mind. It is easily conceivable that Mrs. Eddy may have so interpreted it when she refers to "God's courtesy" (The First Church of Christ, Scientist, and Miscellany, p. 341). In a world of sham, manners may rank above sincerity, but a highly polished surface may hide a decayed interior. True courtesy is never a veneer. Studied politeness, courtly mannerisms, and the like, are admirable enough when accompanied by sincerity, but they are not of themselves characteristic of the genuine courtesy enjoined in Scripture. 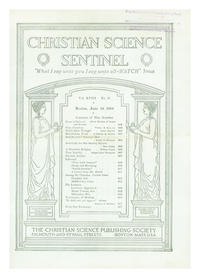