The item "About Christian Science" in a recent number...

The item "About Christian Science" in a recent number of Echoes, found an alleged inconsistency on the part of Christian Scientists which can be found as easily in the teaching and practice of Christ Jesus. It says: "They profess to believe that these bodies of ours have no real existence. Then why trouble to heal them?" It should be remembered that Jesus did a good deal of healing, although he said, "The flesh profiteth nothing."

In the same item Christian Scientists were reproved for eating and drinking; but the writer of it took no notice of the fact that Jesus, although he rested at the well of Sychar while his disciples went to buy food, and though he asked the Samaritan woman for a drink, told her that he could give her a better kind of water, — "Whosoever drinketh of the water that I shall give him shall never thirst; but the water that I shall give him shall be in him a well of water springing up into everlasting life." It is to be observed that the Master and his disciples had received money with which they were able to purchase food, yet the receipt of money was put by our critic among our supposed inconsistencies.

Send a comment to the editors
NEXT IN THIS ISSUE
Article
That Christian Science is indeed founded on the Scriptures... 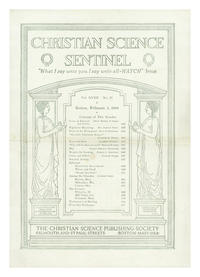