Coordination of the Vine and Its Branches

Mrs. Eddy writes in the Preface to Science and Health (p. xi), "When God called the author to proclaim His Gospel to this age, there came also the charge to plant and water His vineyard." Quite naturally the most important part of this planting and watering of the Father's vineyard—with the exception of the publication of Science and Health—was the organization of The Mother Church, and as time went on of the branch churches. Both The Mother Church and these branches, during the early decades of their establishment and growth, passed through a number of states and stages of organization and development under Mrs. Eddy's watchful care and demonstration. Thus guided and fostered they finally became what they now are in form and government, organizations which are necessary for the protection of Christian Scientists and for the safeguarding of the orderly progress of Christian Science as that religion which is reinstating primitive Christianity and demonstrating the power of Christ, Truth, to heal the sick and save the sinful today as in our Master's ministry.

In its early years The Mother Church was the only one of the denomination, and Mrs. Eddy's personal work as its pastor engaged a great deal of her time and attention. Later she induced a number of the students whom she herself had taught, to enter upon the work of organizing branch churches in the larger centers of population and engaging as their pastors. Mrs. Eddy's next progressive step was the ordination of the Bible and Science and Health as the pastor of all Christian Science churches, including The Mother Church, and the form of service which she then instituted stands today as the completed and permanent form of service for each and every church of this denomination. 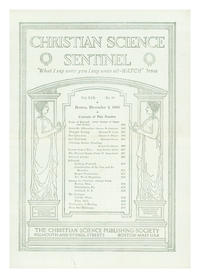