A news item from Belleville, in an issue of recent date, has...

A news item from Belleville, in an issue of recent date, has been brought to my attention, in the head-lines of which are the words, "Child dies as result of Christian Science," a conclusion which I am sure is not correct. The principal facts related in the article,—which describes, by the way, a St. Louis case,—namely, that a child died, that it had Christian Science treatment, and that a coroner's investigation was called, I have ascertained to be correct. The facts, however, do not warrant the conclusion that the treatment caused the death. In fact Christian Science, which employs no other power than that of God, could not be the cause of death. On the contrary, it has in countless instances averted death, and hundreds of people who had been condemned to die, by the most advanced medical knowledge, have been restored to health and usefulness through its ministrations.

The parents of this child called a Christian Science practitioner for no other reason than that their experience had led them to have more faith in God and His power to heal, as preached and practised by Jesus and his followers, than in any earthly agency, even the most learned physician. There is nothing in the facts to prove that anything else could have done more than was done, and I am reliably informed that even the coroner's physician expressed it as his opinion that it was doubtful if the child's life could have been saved had a physician been called.

Send a comment to the editors
NEXT IN THIS ISSUE
Article
The speech made by Senator Works of California in the... 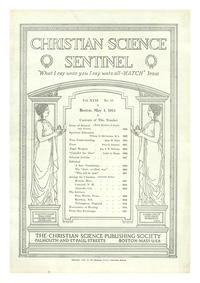