"Father, I thank thee that thou hast heard me. And I knew that thou hearest me always." Studied, analyzed, and understood in the light of Christian Science, these sentences give the clearest understanding of genuine, effective, healing gratitude. Jesus required not the consummation of his desire before he felt and voiced his deep thankfulness for the understanding, the scientific knowing, that Life is all and death is nothing. The false testimony of the material senses that Lazarus was dead meant nothing to the master Metaphysician. He understood and knew that Lazarus' true selfhood was living, even though his sister had lamentingly declared that he had "been dead four days."

The beloved disciple's record of this, second to but one of Jesus' metaphysical achievements, evidences the Wayshower's careful study of how he might best present to the human consciousness convincing evidence that death is but a delusion. Calmly, with infinite patience and confidence, he remained two days where he was, after the news of Lazarus' sickness reached him. When Jesus arrived at Bethany, Lazarus had "lain in the grave four days already." But what mattered four days in the sepulcher, or even four years? Would they render his friend any less the child of God,—the perfect idea of infinite Mind, and therefore indestructible? Jesus could not fear that the interim would render any less effective the healing consciousness which was with him always. It was necessary for him only to speak the word, to rouse mortal mind, as manifested both in patient and spectators, to a sense of the ever-presence of Life; and the more firmly imbued was this consciousness with the belief that the death of Lazarus was a fixed fact, the more impressive would be the demonstration. There was no doubt that in obedience to his command the dead would arise. Jesus was thankful in advance; his thankfulness was scientific. Accordingly, Lazarus "came forth." 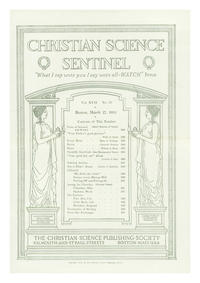