My interest in Christian Science was awakened through...

My interest in Christian Science was awakened through the reading of some copies of the Sentinel and the Journal given to me by a friend. While carefully perusing these periodicals, the Bible, which I studied in connection therewith, became a book of inspiration, although it had formerly brought me a sense of confusion in that I could not reconcile myself to its seeming contradictions. I now feel that it is only a just acknowledgment of my thankfulness to God, and my present attitude toward this living truth so beautifully revealed to us by Mrs. Eddy, to tell of some of the ways in which I was benefited at that time, for I had not yet read Science and Health.

It was in April, 1899, that I received and read the periodicals, and the twenty-first of the following month I discontinued the use of drugs and began to rely upon Christian Science as my guide to health and harmony; since the idea of a religion that could heal the sick appealed to me and brought me new hope. From the days of my childhood I frequently had severe headache, and for several years had suffered, a great deal from stomach trouble and bilious attacks, which had sometimes resulted in bilious colic. Not unlike other sufferers from these physical ailments, I had become a slave to certain dietetic rules, but the truth was now taking root. As I began to learn that everything God made is eternal and indestructible, and that He governs the universe, including man, the afflictions correspondingly disappeared, and I began to eat without fear whatever came my way, and to enjoy it. The benefit which I had received up to this time, however, was only the twilight of a fuller realization of the power of infinite Love.

Send a comment to the editors
NEXT IN THIS ISSUE
Testimony of Healing
I am so thankful for what Christian Science has done for... 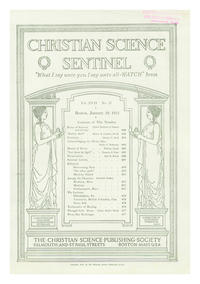