In "Pulpit and Press" (p. 3) Mrs. Eddy designates our heritage as the "sovereign power to think and act rightly." This indwelling power is the kingdom of God within us, the consciousness of man's spiritual oneness with his divine Principle, and is the most priceless possession of the Christian Scientist. We defend this heritage by our faithfulness to it, by using to the full this power of right thinking and acting. Our only protection from evil lies in our consciousness of good, which is a sure refuge and fortress, "the secret place of the most High." The safety and success of our beloved cause demand that all who are connected therewith shall remain in this fortress, man its defenses, and keep out the evil thoughts which would invade its precincts.

The Christian Science movement has not reached its present position without opposition, and we need not suppose that it will continue the fulfilment of its divine mission unopposed. "The powers of this world will fight," writes Mrs. Eddy; and again, "Truth is still opposed with sword and spear" (Science and Health, pp. 225, 134). That, however, which opposes itself to Christian Science is not a person or persons, but a state of erroneous thought, named by St. Paul "the carnal mind," and defined in Christian Science as the flesh which is opposed to Spirit. In the human consciousness materiality is arrayed against spirituality. The carnal mind, with its material ways and means, opposes Christian Science because of its spiritual ways and means. This mental warfare is the strife between good and evil thoughts, between the thoughts that lead toward sensuality and the thoughts that lead toward spirituality. 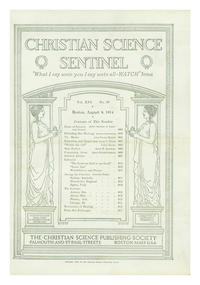