One of the ancient writers is quoted as saying, "Where you are is of no moment, but what you are doing there." Whether one's duties take him into a counting-house or a store, a professional office or on a judge's bench, into a schoolroom or a factory, does not matter so much as what he is doing there. If he is obeying the divine law of love, dealing with his fellows on the basis of the golden rule, seeking first to be governed by good, then his place of daily activity becomes a sanctuary, a literal vestibule to the kingdom of heaven. If, however, he is not doing these things there; if he is not working to bless his neighbors as well as himself; if he is not loyal to his declared concept of God and to the love that should be in his own heart, it is because he is submitting to evil, and leaving God largely out of his affairs.

A Christian Scientist obeys the moral law, not merely from a sense of business honor or duty, but from love for his fellow men. His enlightened thought, which recognizes and declares that man is the son of God now, and that he is in truth that man, recognizes also that honesty lies in being faithful to that high ideal. To be honest because honor bids us be so is commendable, and is indispensable even to the human standard of manhood; but to be honest because we love our fellow men is the ideal motive, and is the essence of square dealing. We cannot conceal our true selfhood from others if we have ourselves awakened to it. When the heart is actuated by love for God and man, it will be as apparent in a commercial transaction as in a church meeting. If the Christ-spirit is not manifest in our business affairs, it is because we do not possess it. A genuine Christian must, by every rule of consistency, be a genuine Christian everywhere alike. 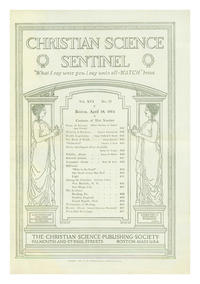