Any one who undertakes to state the teachings of a religion...

Any one who undertakes to state the teachings of a religion in which he does not believe, is likely to encounter a difficulty, for the reason that he is apt to lack the appreciation and insight which would enable him to speak of it with accuracy and justice. Twice difficult is the task of one who attempts to sum up a religion other than his own in a few brief sentences.

Send a comment to the editors
NEXT IN THIS ISSUE
Article
If our friend whose letter appeared in a recent issue will... 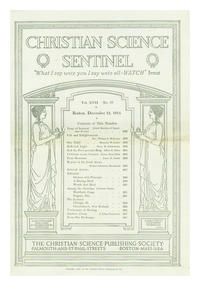