In her definition of church, Mrs. Eddy says, "The structure of Truth and Love; whatever rests upon and proceeds from divine Principle" (Science and Health, p. 583). This definition should decide for every Christian Scientist the lines of his activity. Aside from what is considered regular church work, whatever movement is based upon Principle is really part of the church structure. The individual cooperation of Scientists is needed in all that makes toward freedom of thought, toward purer city, state, and national government, toward the establishing of justice and peace, and toward the equalizing of the sexes. Because Scientists are working with a demonstrable Principle, their cooperation is of double value: they know that self-seeking in the individual or in the nation is inimical to growth; they know that good cannot come from evil, and that only as all government rests upon divine Principle is it upon a sure foundation.

The fact that Mrs. Eddy established The Christian Science Monitor as a daily newspaper for the home is proof of her earnest desire to have Christian Scientists carefully informed in regard to the world's activities. Because one phase of the power of Truth is emphasized by Scientists, many assume that the healing of the sick is the entire work of Christian Science. But this is far from true. Every phase of human discord is disease, and Truth is the remedy. Christian Scientists are building their church as they work to demonstrate that Truth heals not only the physically sick, but also those conditions, whether of the city, state, or nation, which are not expressions of the activity of Mind. Gladly then do they join hands with all who are working to liberate and thus elevate the race, when this work "rests upon and proceeds from divine Principle." 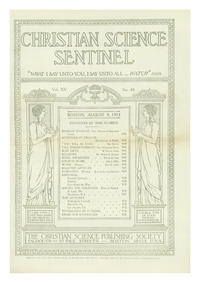