The prophet Isaiah states that "the work of righteousness shall be peace; and the effect of righteousness quietness and assurance forever." It is a matter of comment among people brought in contact with Christian Scientists, and perhaps especially so among those who attend Christian Science services for the first time, that those whom they meet seem to have gained much by way of happiness, which has found its expression in their countenances.

The question naturally occurs, What is the secret of this happiness, and how may it be found? It may be said of many Christian Scientists, "These are they which have come out of great tribulation." As a class, they have had much the same experiences which come to humanity as a whole. In one respect, however, they differ, in that they are to some extent learning through the teachings of Christian Science how to overcome rather than submit to evil, and how to distinguish and separate between the real and the unreal; how to "abhor that which is evil," and "cleave to that which is good." They are learning too that God is infinitely good, and that His creation is perfect and eternal. They are also learning to know "the things that are freely given to us of God." 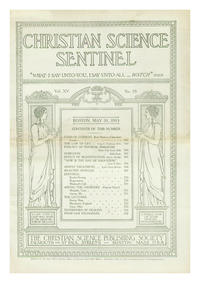