I have been healed in Christian Science of a severe attack...

I have been healed in Christian Science of a severe attack of illness. At the time I was staying with three children who were very sick, their mother being at a hospital. When I was taken ill a Christian Science practitioner gave me treatment, and I did not stay in bed even a single day after she treated me. At another time I was suffering with my heart, but through treatment I was relieved in one night. Again, about one year ago, I was struck in the temple and knocked down in the street by a baseball. I was thought to be dead, and when conscious I could not move my arm without great difficulty; but as soon as I was treated in Christian Science I could move my arm, and my temple did not show any bruise the next morning. After the second treatment I was entirely healed.

I am in my seventy-fifth year. I love and trust God and daily thank Him for His goodness in opening the eyes of the blind to this healing truth.

Send a comment to the editors
NEXT IN THIS ISSUE
Testimony of Healing
Like a great many others I came to Christian Science... 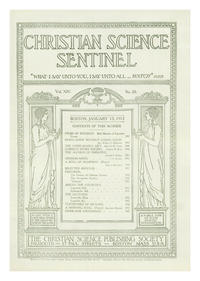