As used in general conversation, "finite" and "infinite" are relative terms. What seems to be infinite to one person may appear to be finite to another, and vice versa. This may be illustrated by the following instances. When a wireless telegraphic message is sent, the operator sees a flash of light and hears a short, sharp report each time he touches the key, yet electrical scientists tell us that when this phenomenon occurs electricity surges to and fro in the transmitter at the rate of four hundred thousand oscillations a second. They also tell us that the message dashes into space at the rate of more than one hundred and eightysix thousand miles a second. To the lay mind these movements are beyond comprehension. Indeed the uninstructed can have little apprehension of their meaning. They are for us immeasurable, and therefore in a relative sense infinite. The rates of speed mean nothing to us, solely because we cannot bring them within our mental grasp. The electrical specialist has a clearer and more or less definite conception of them, because of his less limited attitude of mind toward them.

In a yet more remarkable way we are able to think of the giant suns of the firmament without effort; yet these suns are not only incomprehensible distances away from the earth, but also incomprehensible distances away from each other. Sirius and Vega are known to be two hundred and six trillion miles apart, and Polaris and Canopus have been estimated to be not less than eight quadrillion miles away from each other! Yet while these distances are inconceivably great, quite beyond our range of comprehension, it has been found that only the one hundredth part of a second is needed to think of any one of the stars and to jump in thought to any other star. Thus relatively infinite space is spanned in relatively infinitesimal finite time. But, startling as this fact may be to us, we are confronted with a still more startling one; namely, that while we can think of these immeasurable distances in such brief periods of time, yet we require the same amount of time to think of two objects near enough to us and to each other to touch! This is therefore a reverse case, and we may conclude from a comparison of the distances and the rates that in the latter case a relatively infinite time has been required to cover a relatively infinitesimal finite space. 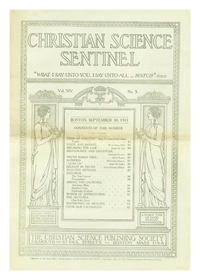