The ancient Italian city of Ravenna, situated some miles from the Adriatic sea, was protected from invasion by a long stretch of shallow water, through which a channel was marked by posts projecting above the surface. When an enemy threatened from the sea, these posts were pulled out, and the city was thus saved from its foes, who could find no safe channel for approach.

Along the course of the human experiences of all of us are set the mile-posts of events and anniversaries whose recurrence marks the flight of time. These posts are not planted by time, but set by ourselves, ignorant or heedless of the fact that we are thus marking an open channel for the enemy we call age-limitation to enter from the sea of human beliefs. The passing of time is a mortal belief which lies wholly outside the realm of infinite Mind, wherein one day is as a thousand years. The trend of habit and custom is to admit and expect certain changes in physique and mentality with the passing of years. Up to a certain or uncertain point these changes are declared to be for the betterment of the individual, bringing strength and development of body and mind; but after maturity is reached, this laudable belief gradually gives way to the baneful one of deterioration and impairment.

Send a comment to the editors
NEXT IN THIS ISSUE
Article
"THIS ONE THING I DO." 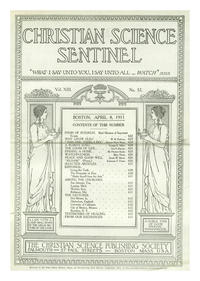