THE NECESSITY FOR INDIVIDUAL WORK

The desire to be good is the first essential to living a good life; but this desire alone does not bring that knowledge of God which overcomes the sense of evil. There must also be the willingness to give effect to desire, the readiness to work one's way out of error, to be what one desires to be, else the mortal will stagnate at that point, passively submissive to a false concept of being. Jesus preached the gospel of work as well as of faith and prayer, and at no time encouraged the hope that the kingdom of heaven could be won without striving for it. Even at the eleventh hour, according to the parable, the call comes to work. "The works that I do shall he do also," was Jesus' message to his followers in all ages.

The Master and his apostles taught the necessity of working out one's own salvation, but not since the early days of Christianity has this necessity been so urged upon the attention of mankind, nor the way thereof made so plain, as in the advent of Christian Science. Appeals for righteousness have not been wanting, and much good has resulted in restraining the evil impulses of mortals, but the doctrine that sin is pardoned without personal reformation has obscured the demand which divine Principle makes upon each individual to work out his own problem. The ignorance of God that holds mankind in the sense of sin and its effects can be removed only through a knowledge of God; and this knowledge is Science, and Science requires demonstration, and demonstration involves work. One may theoretically believe himself to be a son of God, without manifesting Godlike qualities; but a knowledge of this fact put into practice, and this alone, enables a Christian to follow his Master in deed as well as in doctrine. 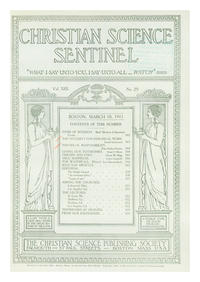