The standpoint of Christian Science is that there exists...

The standpoint of Christian Science is that there exists a sharp distinction between the life and teachings of Christ Jesus and all others, that there is a radical difference between the Christ—method of healing sickness and sin and all other systems. We claim that the words and works of Jesus are distinctive and unique, a difference so fundamental as to require that his method shall stand by itself and not be classed with any other. To those who understand Christian Science the fact is clear and capable of scientific proof that Christ Jesus departed wholly from the doctrines and material methods of the world. He did the Father's will not by conformity with the world's theories and practices, but by introducing in opposition thereto a method wholly spiritual and pure, and which was not understood but was resisted and rejected by those who relied upon the evidences and methods of the material senses. He made good his statements: "My doctrine is not mine," "I am not of the world," "I speak to the world those things which I have of him," "He gave me a commandment, what I should say, and what I should speak," "I do always those things that please him," "All things whatsoever thou hast given me are of thee," "Because ye are not of the world, but I have chosen you out of the world, therefore the world hateth you,"

There is abundant evidence that Jesus distinguished sharply and absolutely between his method, as shown by his words and works, and all others. When he was accused of doing his healing works by Beelzebub, a name for the most hidden type of evil, his reply contained a sharp denial and rebuke. He saw that they were trying to fasten upon him the same evil methods which they themselves believed in, and he knew that there is a vast and impassable gulf between them, and that they must be kept separate and distinct. There are those today who are trying to reinstate healing into the church as an essential part of its program, but who seem entirely to have lost sight of or forgotten to ask, the question, How did Jesus heal the sick? They seem to proceed upon the assumption that there is no difference at all between work as he accomplished it, and that of any other method. They assume that healing is healing, however brought about, whether by Beelzebub, by materia medica, by mesmerism and hypnotism, or by the Christ—method—the power of God.

Send a comment to the editors
NEXT IN THIS ISSUE
Article
Christian Science is based on the self—evident proposition... 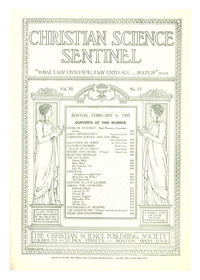