A suit by the Government to compel the New York, New Haven, and Hartford Railroad to dispose of its trolley lines is said to be probable. The total steam mileage of the New Haven road is twenty-eight hundred miles, and it controls fifteen hundred miles of trolley lines, which traverse Connecticut. Rhode Island, Massachusetts, New York, and Vermont. It is estimated that the net earnings of the steam roads of this system during the past fiscal year amounted to $17,751,000, while those of the street railways were $3,616,000. As to the steamship lines under the control of the New Haven, there are nine which it operates between New York, Connecticut, Rhode Island, and Massachusetts, one between New York and Portland, Me., and one in which it has a half interest from Boston to Philadelphia and southern ports. Besides these properties, the New Haven owns and operates electric light, gas, power, and water-supply plants.

There are said to be more than thirty-six million Americans living in territory where the saloon is outlawed—a doubling of the number in the first seven years of the new century. In the souther States the temperance question has become almost a social revolution. The widespread movement is a general moral awakening, which is not yet at its flood. The "Licensing Bill" introduced by the Liberal party in England has drawn new lines through English life. On one side are the drinking classes and the investors in the securities of the great brewery companies. On the other are the people of both parties who are determined that England shall control the saloon and not the saloon, England. A large majority of the bishops have come to the support of the government. A few stand out, and one, at least, has declared publicly against the bill. 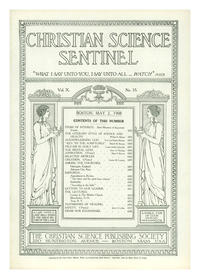