The Senate Committee on the Judiciary has favorably reported a bill regulating the practice of granting injunctions by United States courts restraining the enforcement of State statutes. The bill provides that no circuit or district court shall issue temporary injunctions on the ground of unconstitutionality until testimony shall have been taken by three judges, at least two of whom shall be circuit judges. It requires five days notice of such proceeding to the Governor and Attorney General of the State involved, unless in cases in which the loss of so much time may work irreparable damage, when a temporary order may be issued. The bill also provides for a direct appeal of such cases to the Supreme Court of the United States, and gives them precedence there. It is intended to meet conditions such as have recently arisen in Minnesota, North Carolina, and other States.

On May 7 some 1,150 saloons will go out of existence in the State of Illinois as the result of recent elections. On the same election day fourteen towns in Nebraska changed from the license to the no-license column. Nineteen out of thirty-five towns in Colorado voted against saloons, and in Michigan the anti-saloon vote won in ten out of fourteen counties. Of the 1,053 Illinois townships in the eighty-four counties voting, only 242 kept the saloon. Thirty of these counties will not have a single legalized saloon after May 7. Seven others are already completely "dry" as the result of the November election. The Prohibitionists figure that only three thousand of the fifty-six thousand square miles of the State will be license territory after May. 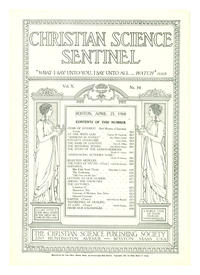