In your issue of May 19 you comment at length upon...

In your issue of May 19 you comment at length upon Christian Science, and in the course of your remarks I note that you refer to the science of spiritual healing, which Mrs. Eddy has discovered, as being in reality the same art which was understood and practised by the apostles. This is exactly the position maintained by Mrs. Eddy with respect to her discovery. It should be remembered that Mrs. Eddy does not claim to have invented or created anything new. She says of herself that she is the Discoverer of Christian Science and the Founder of the religious denomination based upon the spiritual truths she discerned.

The writer of the editorial in question seems to disagree with the teaching of Christian Science that sickness and all bodily discord are the results of sin. I think you will find it possible to give your consent to this doctrine when the definition of sin is elaborated somewhat. As understood in Christian Science, sin is not a designation for a specific wrong act, but it is used in a generic sense to describe all unspiritual or un-Godlike thinking or being. The belief in any power, mind, being, creator other than God is sin, according to Christian Science terminology. There may be gradations of this belief in some other power beside God. It may be a moral and otherwise good belief about existence, present or to come, or it may be depraved and sinful, in the human sense of sin, but Christian Science classifies all that is unlike Spirit or God as sin. Cruden's Concordance to the Bible defines sin as "any thought, word, action, emotion, or desire, contrary to the law of God." Jesus said that he came to fulfil the law of God, and he also said that he came that mortals might have life more abundantly. Then it must have been according to the law of God that man should have immortality. Paul said plainly that "sin entered into the world, and death by sin," and again he said, "The wages of sin is death," and "to be carnally minded is death." What does this indicate but that the condition of existence precedent to dissolution is sin, i.e., some phase of the carnal or mortal mind, and that sin is the cause of death. When death is not brought about by a violent accident it is the result of sickness of some kind; consequently, we have a right to argue that sin is the cause of sickness, accident, and death.

Send a comment to the editors
NEXT IN THIS ISSUE
Article
Christian Scientists are not satisfied with saying that... 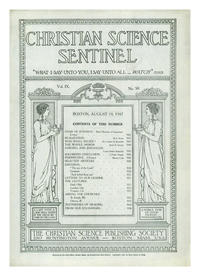