Governor Woodruff, in a special message to the Connecticut Legislature, recommends that the powers of the Railroad Commissioners over be increased so that they can have supervision over the telephone business of that State. He recommends that the Commissioners "should by statue have authority to prevent the issue of stock by any railroad company or telephone company until the par value thereof, of such amount in excess of the par value as the company shall require to be paid, has been paid to the company in cash," and that they should "be vested with the right to regulate and supervise the rates to be charged for service by any and all telephone companies." He says further, "We hear much, and justly, about 'water' in the stock of many public service corporations. It is probably impossible to undo the harm that has been done in this direction, but greedy practices, the effect of which is to exert a drain on the public's purse, by daily imposition of higher rates for services and fares than would be demanded to net a fair dividend were there less liquid and more substance in the stock of such corporations, makes action imperative."

Bryn Mawr's new library, begun in April, 1903, is now completed. It is built of graystone in the Jacobean Gothic style of architecture of the period of 1630, and forms three sides of a closed quadrangle. The east front is one hundred and seventy feet long and contains a three-story stack, with accommodations for eighty-eight thousand volumes. Above this there is a large reading room. On the north side is the Art Seminary. The main building contains offices for the librarians and cataloguers. The wings of the building, running symmetrically about two hundred feet in length from the north and south ends of the main building, contain twelve seminary rooms and twenty-five professors' offices. The total book capacity of the library is 168,449 volumes. The building is absolutely fireproof.

Send a comment to the editors
NEXT IN THIS ISSUE
Article
MRS. EDDY FROM THE CHRISTIAN SCIENCE POINT OF VIEW 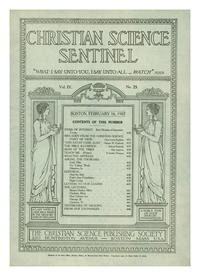