Christian Science, as its name implies, is the Science of Christianity, the demonstrable knowledge of the Christ brought within the reach of human understanding. (Science and Health, p. 471.) Nothing that mortals may do can add to or detract from its availability and perfection; while all who live it and love it are redeemed and glorified thereby. It is co-existent with God, the same in all ages, needing nothing of man but giving him access to all good. So far as it is received and made the standard of living it destroys the tendency towards evil and sensuality. Its influence upon mankind is always for moral and spiritual betterment. The failure to obey its rules, on the part of one outwardly accepting them, is unfortunate for the individual concerned but can reflect no discredit upon the system. True Christianity, wherever taught, represents the sovereignty of good over evil, and offers mortals the only salvation therefrom, but it bears no responsibility for the disloyalty of those who forsake its divine precepts while claiming to march under its banner.

If Christian Science were the product of human wisdom it might be found capable of leading mortals into error, and be held accountable therefor; but its teachings nowhere indicate that they are the outcome of human thought, and in defining its premises Mrs. Eddy went in direct opposition to the deductions of human material reasoning. Christian Science admits not the smallest fraction of the claims of evil; it holds no ideal before its followers that could take them into any questionable enterprise or into the defrauding of their fellows. Its practice affords no excuse for wrong doing, for business dishonesty, unfair methods, immorality, or any form of sin. It knows no favored class, gives no concessions to wealth or worldly position, but has the same unchanging rule of righteousness for all. Those who would receive its blessings must walk in the way it points out, must overcome their love of sin, love their neighbor, be absolutely honest, truthful, upright every hour of the day and with whomsoever they may deal. To go contrary in any direction to the teachings of Christian Science, based as they are upon the allness of God, good, is the work of evil and is chargeable to it alone. 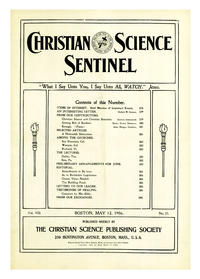