Early in my experience in Christian Science, I had been...

Early in my experience in Christian Science, I had been healed of a chronic ailment, but was always fearful that something might be said at the testimonial meetings which would hurt the Cause or give critics an opportunity to ridicule the Science. One evening a testimony was given wherein it was asserted that a man's arm had been drawn into some machinery and that he had experienced no pain. On our way home my wife and I expressed the opinion that these extreme cases should not be spoken of on Wednesday evening, when some were apt to be present who might scoff. We are now much readier to believe all such statements because of the following experience.

About a year ago I was awakened from sound sleep by a noise which I thought came from the children's room. Half asleep I rushed into the hallway and almost into the arms of a burglar, who met me with a blow on the forehead. This was followed by three more blows before I went down. When consciousness returned my first thought was that life does not depend upon material conditions, and that in God I have perfect strength. I tried to wash away the blood which was flowing, but the confused feeling was so distressing that I decided to go back to bed. I barely succeeded in doing this when I again lost consciousness. A Christian Science practitioner was notified and a physician called a dress the wound. There were very severe injuries and it was a very delicate and difficult undertaking. This occurred at half past three o'clock, Friday morning, and I was out of the house before 11 A.M. of the same day. On the following Monday I was at my desk as usual. I can truthfully say that I felt no pain, that there was no fever, no inflammation, not even a headache. 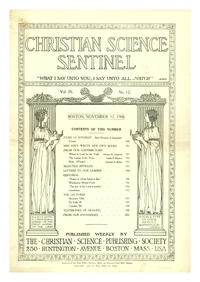