Recently there has appeared in a daily paper an article, based upon an "investigation" by two of its reporters, in which is alleged, among other things, that for several years Mrs. Eddy's health has been such as to render her unable to leave her house, and that during this period she has been impersonated on her daily drive by Mrs. Pamelia J. Leonard, a member of her household. This latter charge was backed by the affidavit of a man who was formerly the janitor of the building in Brooklyn, N. Y., in which Mrs. Leonard and her son have offices. This man made an alleged "identification" of Mrs. Leonard as the occupant of Mrs. Eddy's carriage on Oct. 22.

The utter falsity of this charge is established by the following affidavits:—

Send a comment to the editors
NEXT IN THIS ISSUE
Article
MRS. EDDY RECEIVED 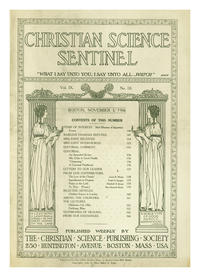