Negotitations carried on between the Eastern Yacht Club of Marblehead and the Kaiserlicher Yacht Club of Germany, promise to result in a new perpetual challenge cup race. The proposed races have the support of Emperor William. A committee of three has been appointed by the Kiel Club to confer with a similar committee to be appointed by the Eastern Yacht Club, to perfect arrangements for the establishment of the trophy and the first races to be sailed for it.

Many protests are said to be coming in because of the declaration of the Internal Revenue Bureau, that after December I everybody who sells patent medicines which are "composed chiefly of distilled spirits, or mixtures thereof, without the addition of drugs or medicinal ingredients in sufficient quantities to change materially the character of the alcoholic liquor," will have to pay the tax of $25 a year as liquor dealers. This is a reversal of the practice of the Department. It has heretofore accepted the sworn statement of the manufacturers as to the ingredients. Hereafter this will be determined, not by the declaration of the manufacturers, but by the Government chemists, who will go into the market and buy proprietary articles under suspicion. 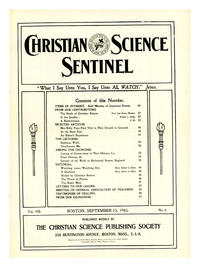