For the fiscal year 1905 the total postal receipts from all sources, according to the report of the Postmaster General. were $152,826,585, and total expenditures $167,181,959. leaving a deficit of $14,572,584. In connection with these figures he directs attention to the 12.58 per cent of free matter handled, a loss in revenue of $19,822,000. "Manifestly," he says, "had the matter now carried free been required to have been prepaid, notwithstanding the large expenditures for the rural free delivery service, there would have been no deficit." As a remedy for the franking evil the Postmaster General suggests that there are sound administrative reasons why it would be better business policy for each department to pay postage upon its mail matter according to its class, than to return to the practice of requiring Government free matter to be prepaid by postage stamps in the same way as similar matter mailed by the public. The tendency to use the mails for matter that ought to be otherwise transported would be restrained.

The report says an effective domestic parcels post system could be organized on the same plan substantially as express companies conduct their service and as parcels post service is conducted in other countries. While he does not deem it wise at this time to ask Congress for such a system, he earnestly recommends that third and fourth-class mail matter be merged at the rate of one cent for two ounces. 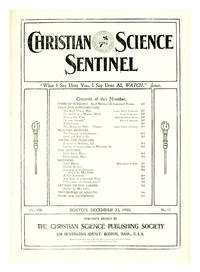