Many years ago I became interested in renovating a garden which had long been neglected. Tall, dead weeds hid much of the surface; a very heterogeneous assortment of castaway articles were scattered about, and it looked as unpropitious an undertaking as one could wish to avoid. Possession was taken late in the autumn and work commenced at once. The debris was cleared away, the weeds cut down and burned, wagon-loads of stones and refuse were hauled away, and the place became almost unrecognizable from the improvements then made.

In the spring, when operations began, plowing and harrowing brought more stones to the surface. When these were removed the seed was sown, part in rows, part broadcast. In a few days countless weeds appeared, and the steel rake was at once started upon the rows. Upon the broadcast area, however, the rake could not be safely used, for fear of injuring the young plants. One plot, broadcast with lettuce, showed minute seedlings in a very short time. The plantlets bore first leaves like those of the sunflower family to which lettuce belongs. Everything looked promising, but the delight at this apparently quick germination was short-lived, for when the third leaf appeared the seedlings were recognized as burdock, and every one of them had to be removed with thumb and finger. In a few days the garden was clear of the early spring weeds, but soon more appeared. These were destroyed only to make way for a horde of other varieties which require higher temperatures to germinate. Thus weed crops of many kinds succeeded each other throughout the summer, each appearing when the time and other conditions were favorable, and it was not until after three years unremitting effort that some of these pests disappeared. 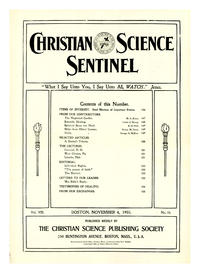