Great reforms will come about in God's own way, in a...

Great reforms will come about in God's own way, in a perfectly natural order. What is this order? With those who are now interested in Christian Science it came about in this manner: When sick, almost every material means known to the patient, or within his reach, had been tried and failed. As a last resort, Christian Science was given a trial, and as a general rule with less faith in its efficacy to heal than he had in drugs, and yet when this Science was demonstrated he was restored to health. It is perfectly natural when such results have been achieved, if the patient is a parent, he would want this same treatment for other members of his family. Not only has this treatment resulted in bettering the condition physically, but in almost every instance it has resulted in awakening the patient to a spiritual life, awakening an interest in the Bible, and establishing greater trust in God, good.

So charitable are Christian Scientists that if they were in the majority and had it in their power to compel those who believe in materia medica to take Christian Science treatment they would not do so. They believe in letting God govern all people, for when they tire and become weary of the material, they will turn to God for help, even as the flower turns to the light. Living in this Christian attitude the Christian Scientist is not at war with materia medica, but is only patiently waiting for all mankind to come in possession of the Mind that was manifest in Christ.

Send a comment to the editors
NEXT IN THIS ISSUE
Article
A religion that bears fruit in the lives of its adherents is... 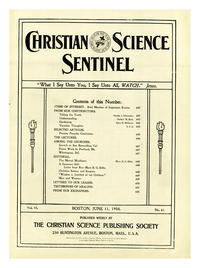