About the time I became interested in Christian Science I was employed in an office where my patience was sorely tried and my understanding put to a severe test. The chief of the office was a person who, to human sense, was very irritable, fault—finding, and unkindly critical. No one in the office seemed to be able to perform any duties in a manner satisfactory to him. His language was severe and inconsiderate. To me this was a new experience and I often felt that I must resign my position, as I thought I could not endure it much longer; but I resolved not to retreat in the face of the enemy.

One evening my wife suggested that I take the matter up mentally and overcome the sense of inharmony. I at once began working, as best I could, to realize that man as God's child could not be made a channel through which a sense of error could manifest itself. Weeks and months passed without change of condition. At last I recalled a passage in Science and Health, p. 454, which reads, "Human hate has no legitimate mandate and no kingdom. Love is enthroned." I at once said to myself, and with great satisfaction, "This applies exactly to that other fellow," and I worked with renewed vigor, some weeks longer. One day it dawned upon my consciousness that the passage above quoted might be for me and not for the "other fellow." Self—examination revealed the fact that I was not entertaining a surplus stock of love, and I went to work to correct my own thoughts,—to clean my own windows and set my own house in order. 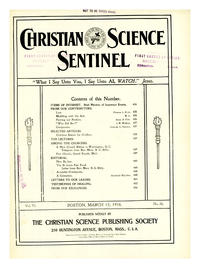