The Avoidance of Extremes

The tendency of the human mind to go from one extreme to another proves a lack of the true understanding which never finds a necessity for evil in any direction. Christian Science does not admit that evil is undeveloped good, or good carried to excess. One of our early lessons is that if we are obedient to Truth we shall be divinely guided and directed in all we do. Our Leader teaches emphatically that we must learn to distinguish between "the wrong motive or the true—the God-given intent and volition—arrest the former, and obey the latter." She also says, "The neophyte is inclined to be too fast or too slow" (Miscellaneous Writings, p. 117). This shows that understanding is needed in order to avail ourselves of Divine guidance.

A few months ago, a timely warning was given in the Sentinel, in view of the fact that some of our members had been the victims of misplaced confidence, and had been defrauded by persons who falsely claimed affiliation with Christian Science. Although similar reports have come in recently, it is not advisable that our columns be given to statements of this kind, since the purpose of our periodicals is to tell of the power of Truth to destroy all error. A word to the wise should be sufficient. 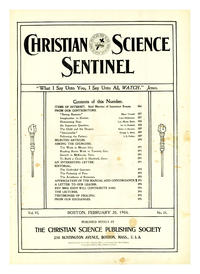