WE are devoting considerable space in this issue of the Sentinel to the defeat in the North Carolina Legislature of a bill, ostensibly for the regulation of the practice of medicine, but in fact for the prevention of the practice of Christian Science. It is to the credit of the legislature that the arguments which prevailed were based upon purely constitutional grounds and in accordance with the Declaration of Independence which says, "We hold these truths to be self-evident,—that all men are created equal; that they are endowed by their Creator with certain unalienable rights; that among these are Life, Liberty, and the pursuit of Happiness. That to secure these rights, governments are instituted among men, deriving their just powers from the consent of the governed."

The question primarily involved in the justice of such legislation, must be whether medicine is recognized by all intelligent people to be a necessity, or whether they differ on this question. Under our law, a man has a right to use his faculties in matters where mankind have not reached definite and fixed conclusions, and where intelligent people are not agreed. With this test applied, prohibitive legislation of this character must fail. 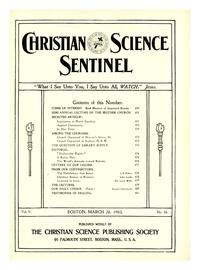