It was in June, 1887, that I first heard the words Christian Science

SARAH A. WILLIAMS with contributions from BERTHA BARKER

It was in June, 1887, that I first heard the words Christian Science. I had suffered intensely for a number of years from a complication of diseases, from which no physician seemed able to relieve me, and finally I was told by several physicians that I would never be well until I had an operation. I finally went to a sanitarium and submitted to two operations; but instead of being benefited I was left helpless and told that I would never be able to walk without the use of supporters. In March I was carried home and placed in bed where I remained most of the time until June, and during that time there was hardly a day or night that I did not have hot cloths applied to relieve pain.

One day a dear friend came from town to my home in the country, and brought with her a lady and said to me, "I have brought you something now that will heal you." I asked what it was, and she replied that it was Christian Science. I repeated the words several times and thought them the sweetest words I had ever heard. I asked what it was, and was told that it was God who did the work. I accepted this at once, for I said I had always been willing to trust Him. The practitioner wanted me to come to her home and stay during the treatment, but I said I dared not attempt to ride so far. She replied, "We wont let it hurt you." I somehow seemed to feel that I was putting myself in God's hands, and forgetting all the rest.

Send a comment to the editors
NEXT IN THIS ISSUE
Testimony of Healing
I have been feeling for some time, that I ought to write... 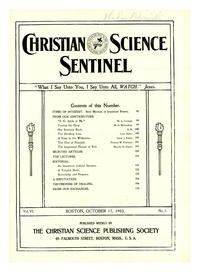