Christian Science before a Society of Medical Jurisprudence

The New York Times recently published a synopsis of a paper read by Charles M. Demond, Esq., of the New York Bar, before a meeting of the Society of Medical Jurisprudence of New York City. The paper was entitled, "Legal Prohibition of Unprofessional Mental Healing."

"Mr. Demond," the report says, "described Christian Science as a species of charlatanism dangerous to the community when it jeopardized life or health by teaching that medicines were useless, and that even surgery was often unavailing and could be replaced by praying." 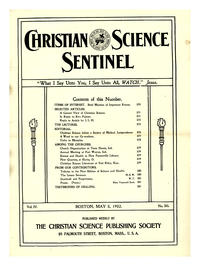