One of the most subtle temptations, to which we are subjected, is that of trying to make Christian Science easy for our friends, so that it will not grate harshly upon their preconceived notions of God and the universe, nor upon their views regarding socia, economic, and religious problems that have taxed the world for ages. We will not accede to this temptation unless we forget that there is no solution of the world's problems except by the way of God's appointing; that the way of divine Science is as exact as the statement that two and two is four; that Principle is unvarying, unchanging, turning neither to the right nor to the left.

The best service that we can render our friends is frankly to take the ground that mortal and material concepts of ethics, economics, and religion have not saved mankind from the results of their self-imposed laws and never can, and that in presenting Christian Science as a means of salvation, we must be prompted only as our Leader was prompted. "The author has not compromised conscience to suit the general drift of thought, but bluntly and honestly given the text of Truth" (Science and Health, Pref. p. x.). Anxiety to win the approval of the world is but a phase of error inducing procrastination, indecision, and confusion of thought and purpose. Temptation seldom presents itself in the form of sin for sin's sake. Without some false promise of pleasure or profit, sin loses its appeal to humanity. 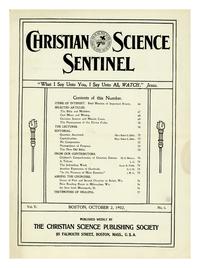