The Bible Teaching Concerning the Power of God to Heal the Sick.

To the Editor of the People and Patriot:—

In a recent issue of your paper it is stated that "Mrs. Eddy and Judge Ewing say that if believers in Christian Science drink any deadly thing it will not harm them," and it is further declared that Mrs. Eddy says "she tried it by taking some large doses of morphine and found that the drug had no effect on her." It is then proposed that Christian Scientists test their healing religion by publicly taking large doses of poison.

Send a comment to the editors
NEXT IN THIS ISSUE
Article
Mrs. Eddy, Christian Scientist 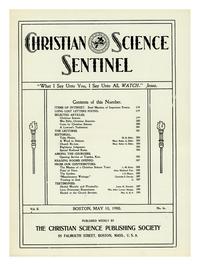