with contributions from Justice Quarles

At the Columbia yesterday afternoon (Sunday, March 18) Judge William G. Ewing of Chicago delivered a lecture on Christian Science. He had an audience that completely filled the lower part of the house and part of the gallery. He was listened to with close attention and all were much interested in his exposition of the subject. The lecturer was introduced by Justice Quarles of the Supreme Court, who said:—

Ladies and Gentlemen:—We have met here this beautiful afternoon to hear something of the principles of Christian Science, as it will be expounded by a distinguished gentleman who will tell us some of the reasons for the faith of the Christian Scientist. The eminent gentleman who will address us, was, for many years, a distinguished member of the bench and bar of the great state of Illinois, and also prominent in political and social circles. In early life he was a friend, associate, and ardent admirer of the immortal Abraham Lincoln. But, notwithstanding the pleasure and gratification that naturally comes to one who achieves success in social and professional life—a realization of the distinguished gentleman with us to-day—he has forsaken a successful professional career, quit traveling a road that would undoubtedly have led him to political eminence, and has taken up the work of a missionary for Christ and humanity, as he sees it. 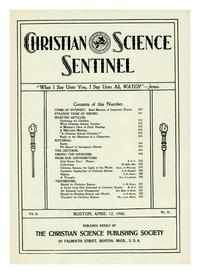