With magical skill Christian Science takes up the chain of events and re-links the distant past with the present. It connects the birth of Jesus, when Bethlehem's star led the Wise Men, with choicest of treasures in token of homage, to the place where the "young child lay," and the present, when the re-appearing of the Christ-Truth illumines the pathway of mortals and is destined to accomplish the same mighty works as of old.

From this leading it may not be amiss to glance in brief at the workings of Christian Science for the past few years. "By their fruits ye shall know them." Christian Science would celebrate the birth of Jesus by an offering of works in token of its power and progress throughout the entire globe. Nearly two thousand years ago the Christian era was ushered in amid great acclaim of joy, and with its advent, there came a fresh inspiration to the human race. The religious world had hitherto lived and served the letter of the law. Human affection had seen confined to the narrow bound of blood or personal preference, so that "peace on earth, good-will to men, all ye are brethren," was a new message to humanity. 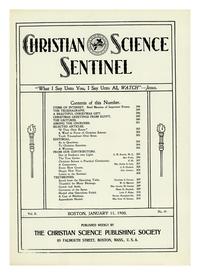