A Statement of Facts

Miss Lizzie A. Moore, the Christian Scientist who had charge of the case of Mrs. M. M. Davis, who died a short time since in Rome and about which there has been much in print, gives out the following statement in regard to it :—

I was first called, as a Christian Science healer, to treat Mrs. Davis in February, 1897. She was then physically helpless with what the physicians pronounced to be inflammatory rheumatism, and was also suffering from heart trouble which she had had from birth. The heart trouble at frequent intervals caused her extreme suffering for periods of one to six months. When I was called in she was considered to be in a very critical condition. Under Christian Science treatment she was healed in two weeks. 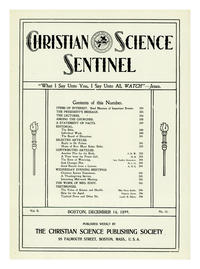