A young woman of an intense emotional nature, with an ardent, ambitious intellect, possessing, it appears, many fine faculties but lacking the saving one of common sense, in a stress of excitement lost her reason and her strength and was committed recently to Agnews asylum as an insane patient, where she died. For some time before her insanity manifested itself she had been a student of Christian Science and a votary of its doctrines. On that showing a considerable number of the people of the neighborhood have come to the conclusion she was rendered insane by the philosophy she was studying, and they have found means to make something startlingly sensational of the case and to raise a clamor against Christian Science and all its teachers.

In that same asylum at Agnews there was for many years—and may be yet, for all I know—a young woman of ardent mind who, while a student at the State Normal School at San Jose, became insane from a strain upon the brain brought about by overstudy and lack of proper recreation and nourishment. Now let us have another sensation and raise a cry against the Normal School, demanding the suppression of the teaching of those who believe in the education of girls. 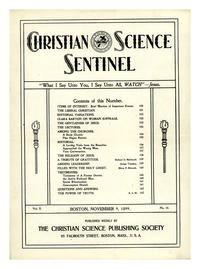