For Syria, prayers that bring peace

Tom Quirk Recent news reports out of Syria seem to hold little hope for a peaceful solution to the conflict between government forces and opposing rebels—a conflict that has escalated to include constant bombardment, civilian deaths, and the threat of civil war.

It can be tempting to think, “This is nothing new.” Conflicts in the Middle East have been going on for thousands of years—if governments and influential institutions haven’t found solutions to end the hostilities, what can we as individuals do?

Lynne Buckley-Quirk is a Christian Science practitioner. She lives in St. Louis, Missouri. 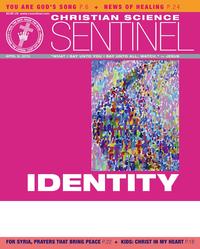