THE TEACHINGS and healings of Jesus, the master Christian, powerfully affected people during his lifetime. And even now they inspire people of many different cultures, races, economic and educational backgrounds to do good. Yet having come from a non-Western/non-Bible-based upbringing, I concluded that denominations were making more effort to monopolize Jesus' teachings through the establishment of their own creeds and rituals, than to proclaim that his message of love was universal.

I'd been living in the United States for 15 years when I first encountered Christian Science. What attracted me to its teaching was its focus on a healing practice based on Jesus' message—on primitive Christianity. I discovered that Christian Science does not wrap up his teachings in cliques and ritualism. And I wondered why I'd never seen it this way before. 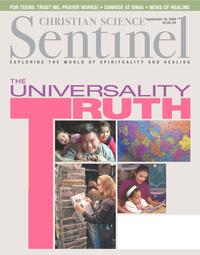