Everyone loves to make a splash on a hot summer day! I was watching some kids at the swimming pool doing cannonball jumps into the water—legs tucked under tight. They wanted to see who could make the biggest, best splash. It was hard to tell who did. In the end, I decided that each one was the greatest, because each one gave their best.

Whenever you do your best, it's like making a big splash. Some of you do it in water, like Christine, who is going to tell you about how God helped her in a swim race. Others do it in school, like Iyanuoluwa, who prayed about trouble with a math problem. Or at camp, like David whose foot was healed after he prayer and learned that he was walking with God. 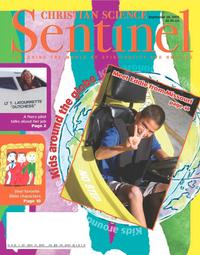